Rabea Massaad has posted a video showing us all how he makes profiles for his Kemper.

This video is perfect timing for me perfectly. We have a long weekend coming up here in the UK, and I’m planning on spending all three days with my Kemper. Any tips I can get will save me a lot of frustration.

I hope we see Rabea’s Kemper profiles available soon. Is there going to be an official Victory Amps profile pack, I wonder?

Chappers and the Captain have posted the 2nd part of their high-gain amp blindfold challenge. This time, they’re looking at 7 amps at £1,000 or below.

These kind of videos are a great opportunity to hear a bunch of amps side by side. Exact same guitar, exact same guitarist, and it looks like they’re running each amp into the exact same cab (so they’re all mic’d up the same). The only difference is the amp itself.

And these aren’t aspirational boutique sell-a-kidney amps. These are the kind of amps that you’d be looking at if you want a real valve amp for home and gigging.

This is a first look at the Synergy Amps system now that it’s home, where I can hear it through my cabs and with my guitars.

I’ve been away for work this last week, and whilst I over the other side of the country, I managed to pick up a set of Synergy Amps modules, enclosures and the power amp.

Now that I’m back at the Hermit’s Cave, time to unbox everything … just to make sure it survived the journey, right? 😀 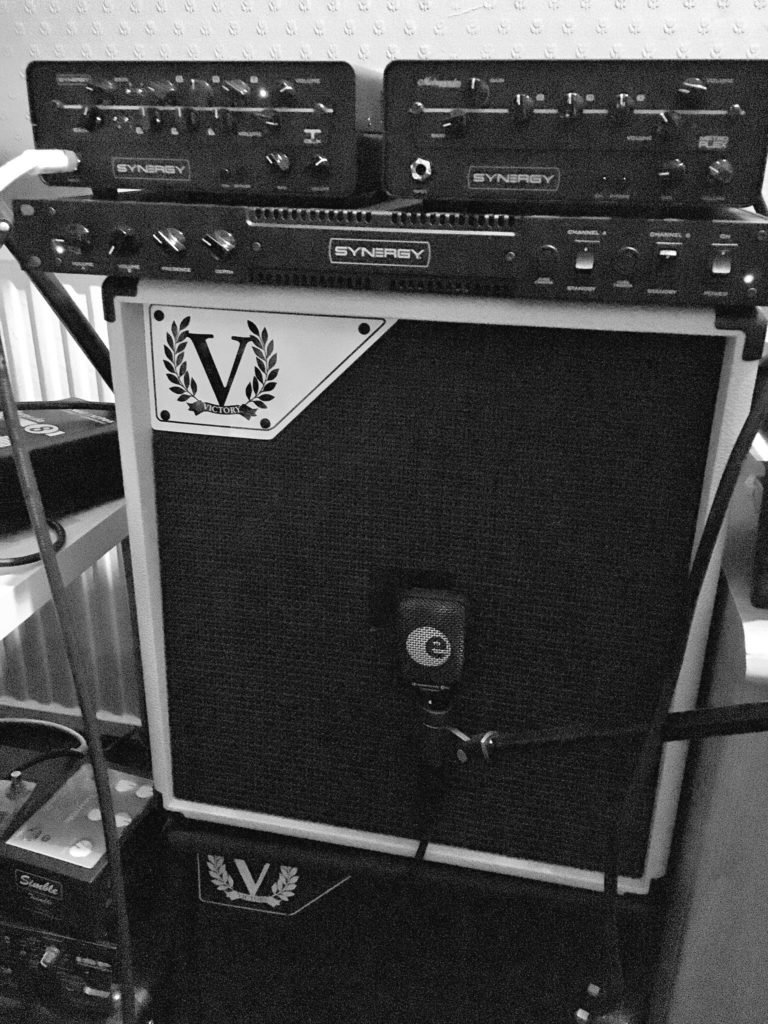 So what have we got here?

Let’s talk about the power amp first. I have a lot more to say about it than I expected to.

The power amp is deceptively heavy. The SYN-1 enclosures aren’t exactly featherweights either. It’s all solid stuff. If it was all mounted into a rack, I wouldn’t want to be moving it around much.

When I switched the power amp on, first thing I noticed is that the internal fan is loud. Loud enough to be heard when playing at home tone volume levels. It’s loud enough to be an issue for my environment. I’m hoping that it’ll be less noticeable once it’s properly racked. Failing that, the sound reminds me of one of those old 90s computer fans. Maybe it’s possible to replace it with something more acoustically engineered?

(I’ll do a follow-up post at some point talking about why fan noise is important.)

I’ve owned a few rack-mount power amps over the years. This one’s a little different to what I’ve seen before. This isn’t a dual mono-block power amp. It took me a bit of fiddling to get both channels working, and at first I really thought that Channel B wasn’t working. It was working, it’s just that Channel B’s volume control isn’t always active.

I’ll do a dedicated post about the SYN-5050’s 3 modes of operation shortly.

One reason why I want to make that a separate post is the manual that comes with the SYN-5050. I didn’t find the manual any help at all. I’m hoping it’s just that the manual is a draft, and that they’ll improve it as time goes on. The diagrams aren’t labelled, the text refers to sections that aren’t included, and the description of MONO, MONO-BRIDGED and STEREO modes wasn’t clear enough for me.

On the front of the power amp, the STANDBY/ON switches for Channel A and Channel B are next to each other. I’ve already switched Channel B on by mistake at least once. Fortunately, I had a cab plugged into Channel B, so no harm done. But be aware of it. It’s an accident waiting to happen.

The amp itself sounds great. It’s 50W in MONO and STEREO modes, and 100W in MONO-BRIDGED mode, I believe. The volume range is very usable for home use – already a bonus compared to many Fender amps! I’m looking forward to running it through the Two Notes Torpedo Captor so that I can crank it a bit and hear that lovely power tube saturation.

I’ve been after a rack-mountable 6L6 power amp for many years. The old Mesa Boogie 2:90 was on my wishlist for a long time. The sheer weight of it always put me off. That, and how much it would cost to revalve! I’ve been using software-based emulation in the mean time, which certainly does a job. I’m very pleased that I don’t have to any more 🙂

This module takes drive pedals really well. Especially on the red channel, which I believe is voiced like a Fender Deluxe. Some pedals just don’t shine through the Blackstar HT-100. I’ve had a couple of them out the cupboard and through the T-DLX, and so far I like what I’ve heard.

Early days yet. I need to do some recording and mixing before I can say that this is definitely a great pedal platform.

The module sounds good through the G12M-65. I would like to pair it with a Celestion A-Type soon, to get even closer to that Fender DRRI tone. I’m going to take a looat at how easy it is to swap speakers in the Victory cabs. Not sure yet whether I’ll swap out the V30, or just pick up a third cab and swap the speaker in that.

The Metro Plex doesn’t take drive pedals at all. When I kick in the pedal, all the bottom end disappears. And I don’t care.

Because this thing sounds utterly glorious with a Les Paul.

I lost what – an hour and a half? two hours? – last night just playing straight into it. Hit the front end with a compressor (like my favourite, the Forest Green Compressor from Mad Professor) or a Wampler Tumnus, and it’s amp drive heaven. I’ve never been a fan of amp drive before. This module has converted me 🙂

Well … almost. I haven’t yet managed to dial in a touch-sensitive kind of crunch. Hopefully I’ll find it. If not, it’s still a special sound, and this module is a keeper regardless.

So Is This A Great Pedal Platform?

I bought this rig to be a completely-overkill pedal platform. The plan was to run pedals into both modules at the same time – a la That Pedal Show and their dual-amp setup – to get the best blended tone possible.

Then I got sidetracked a bit, because I had the opportunity to get the Metro Plex module. The early YouTube demos had deeply impressed me. I didn’t think there were any in the country, so when Peach Guitars said they had one, that was a no-brainer. I really don’t care that it doesn’t take pedals. It’s worth having for what it does.

So, going forward, I’ve got a couple of options.

I’ve already got the HT-100, and I know it takes many drive pedals very well. I’m going to wire that up into the SYN-5050 and give that a go first.

I don’t have a second Torpedo Two Notes Captor atm, and once again they’re on backorder at the retailers. I’m going to have to wait a few weeks before I can try this out.

And let’s not kid myself. I’ve been looking for a platform like Synergy ever since I decided that I’d had enough of digital amps. Unless I run into some big disappointments once I start recording this setup, I am going to collect the other modules over time.

I’ve spent years building a sound around my pedals into the Blackstar HT-100. Getting the Synergy Amps system has blown that up to a certain extent.

It’s going to be a few weeks before it’s fully integrated into my little home project studio here at The Hermit’s Cave. Probably won’t be able to get that done until Easter weekend. After that, I’m going to need time using it to learn how to get the best out of it.

I’ll be posting updates about that as I go.

Over on the Andertons YouTube channel, Joss has built his ultimate metal rig – and it sounds epic.

The basic premise is that this is the kind of rig that Joss would use both to record with, and to gig with. It’s a straight-forward, no-nonsense rig that will handle both lead and rhythm duties in one. If heavier tones are your thing, it’s well worth a watch.